"Many nations shall come, and say: “Come, let us go up to the mountain of the Lord"

When I prayed in the beginning of the year and asked the Lord for His intention for every month of 2017, this is what He gave me.

In January the Lord’s eyes were roaming through the earth to find those whose hearts are committed to Him, so that He could strengthen them. He is looking for those who would say ‘Here I am, Lord’.

February was a month where the Lord confronted us with those things that might hold us back or slack us down in the assignment the Lord prepared for us.

During this month the Lord establishes and positions us in Him … in the midst of persecution, accusation or any attack of the enemy to remove the mandate from God on our lives. He teaches us to STAND, to keep PEACE in our hearts, to release LOVE no matter what. He teaches us that our identity and our position is IN HIM. That is where we are secure! 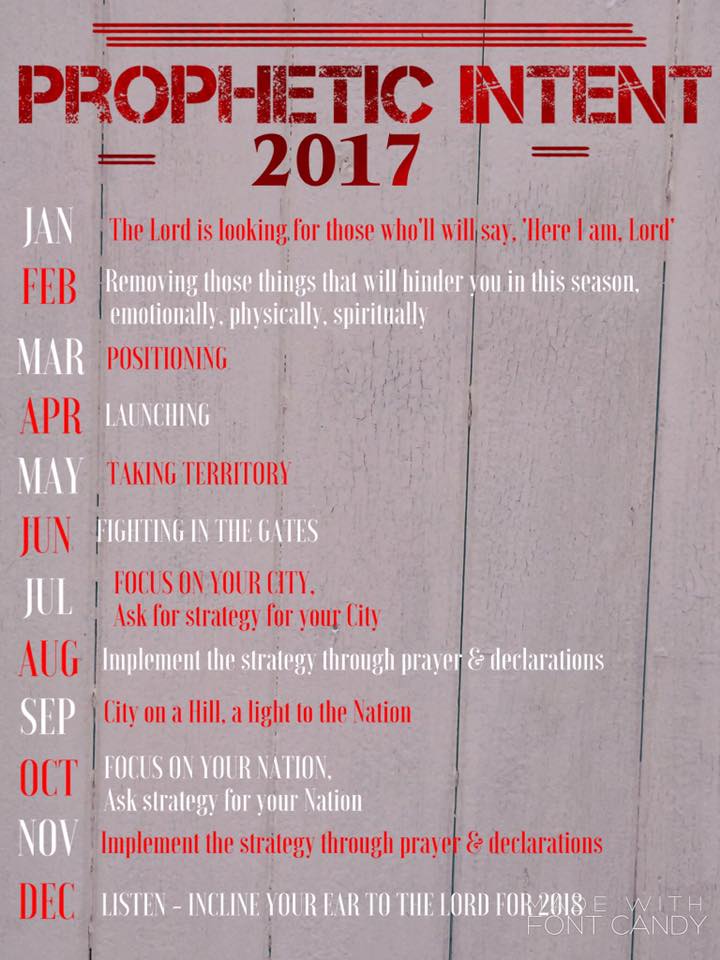 “Say among the nations that the Lord reigns; the world also is established, so that it cannot be moved; He shall judge and rule the people righteously and with justice.“

WEEK 1
POSITION YOURSELF IN WORSHIP! LET GOD SING A NEW SONG THROUGH YOU!

Allow the Holy Spirit to stir up praise in your SPIRIT that supersedes your EMOTIONS!

THE LORD WANTS TO DO GREAT THINGS AMONG THE NATIONS, BUT HE NEEDS US. HE IS ASKING:

“For the eyes of the LORD run to and fro throughout the whole earth, to SHOW HIMSELF STRONG on behalf of them whose heart is perfect toward Him.” (2 Chron 16:9)

“And I looked, but there was no one to help; I was amazed and appalled that there was no one to uphold [truth and right]…” (Isaiah 63:5)
“And I sought a man among them who should build up the wall and stand in the gap before Me for the land, that I should not destroy it, but I found none.
Therefore have I poured out My indignation upon them; I have consumed them with the fire of My wrath; their own way have I repaid [by bringing it] upon their own heads, says the Lord God.” (Ezekiel 22:30-31)

“For the eyes of the Lord are on the righteous, and His ears are inclined to their prayer. But the face of the Lord is against those who do evil.” 1 Peter 3:12

HERE I AM, LORD!
DECLARE YOUR WILLINGNESS TO BECOME PART OF GOD’S PLAN

JESUS WAS OUR EXAMPLE:
“Hence, when He [Christ] entered into the world, He said, Sacrifices and offerings You have not desired, but instead You have made ready a body for Me [to offer];
In burnt offerings and sin offerings You have taken no delight.
Then I said, Behold, here I am, coming to do Your will, O God—[to fulfill] what is written of Me in the volume of the Book.” (Hebrews 10:5-7)

The Lord is looking for those who will HEAR HIS VOICE CALLING and then RESPOND to His call like Samuel did. God wants to take back territory from the enemy; territory that belongs to His children because of the perfect and complete work of the cross!

GOD IS READY “To grant joy to those who mourn in Zion—to give them an ornament (a garland or diadem) of beauty instead of ashes, the oil of joy instead of mourning, the garment of praise instead of a heavy, burdened, and failing spirit—that they may be called oaks of righteousness [lofty, strong, and magnificent, distinguished for uprightness, justice, and right standing with God], the planting of the Lord, that He may be glorified.” (Isaiah 61:3)

Because God wants us to “… rebuild the ancient ruins; they shall raise up the former desolations and renew the ruined cities, the devastations of many generations“.(Isaiah 61:4)

THE LORD’S EYES ARE UPON YOU AND HE IS WITH YOU ALL THE WAY!

“For the eyes of the Lord are on the righteous, and His ears are inclined to their prayer. But the face of the Lord is against those who do evil.” (1 Peter 3:12)

WEEK 4
DECLARE GOD’S WORD, HIS TRUTH, HIS MAJESTY AMONG THE NATIONS!

READ AND DECLARE Psalms 96 OVER THE NATIONS OF THE EARTH!
JOB 22:25-28
“And make the Almighty your gold and [the Lord] your precious silver treasure,
Then you will have delight in the Almighty, and you will lift up your face to God.
You will make your prayer to Him, and He will hear you, and you will pay your vows.
You shall also decide and decree a thing, and it shall be established for you; and the light [of God’s favor] shall shine upon your ways.”

Declare His glory among the nations, His marvelous works among all the peoples.
For great is the Lord and greatly to be praised; He is to be reverently feared and worshiped above all [so-called] gods.

For all the gods of the nations are [lifeless] idols, but the Lord made the heavens.
Honor and majesty are before Him; strength and beauty are in His sanctuary.
Ascribe to the Lord, O you families of the peoples, ascribe to the Lord glory and strength.

Give to the Lord the glory due His name; bring an offering and come [before Him] into His courts. O worship the Lord in the beauty of holiness; tremble before and reverently fear Him, all the earth.

Say among the nations that the Lord reigns; the world also is established, so that it cannot be moved; He shall judge and rule the people righteously and with justice.

Let the heavens be glad, and let the earth rejoice; let the sea roar, and all the things which fill it;

Let the field be exultant, and all that is in it! Then shall all the trees of the wood sing for joy before the Lord, for He comes, for He comes to judge and govern the earth! He shall judge the world with righteousness and justice and the peoples with His faithfulness and truth.”

A Company of Singles

I have been asking the Lord for a word for the single people, men and women, young and old, because I know that the Lord has a specific plan for them.  While ministering to a group of single people, I heard the Lord say ‘I am looking for a company of single people carrying the Spirit of Marriage’.